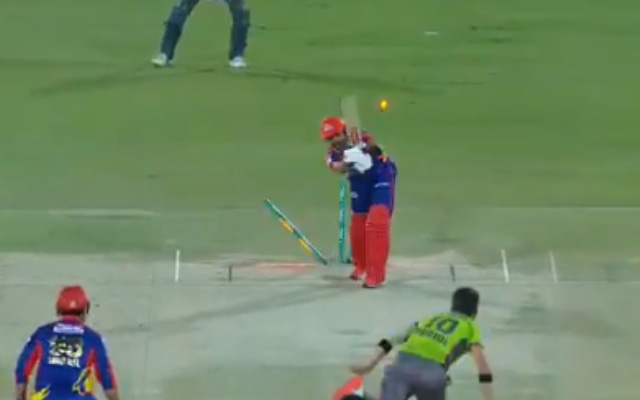 The battle between two top players of the same country is a visual treat for the fans. And, when those two players are specialists in different fields of the same sport, the excitement reaches a peak. That is exactly what T20 leagues around the world have done. All the T20 leagues have given the rare chance for the fans to witness the top players from their country indulging in a battle with each other.

One such battle took place in the 2021 edition of the PSL in the match between the Karachi Kings and the Lahore Qalandars on 28th February 2021. Left-arm seamer Shaheen Afridi was bowling to Pakistan batting sensation Babar Azam, and this battle would have certainly been relished by the Pakistan cricket fans.

However, the battle did not last long, and it was Shaheen who came out on top. Off the fifth ball of the 3rd over, Afridi bowled a peach of a delivery that pitched on middle stump, came into Azam, and cramped him for room. The right-hander was unable to bring his bat down in time and his stumps were disturbed. Azam departed, after contributing just 5 runs to the total.

You can watch the video of the incident below:

The encounter between the Lahore Qalandars and Karachi Kings was a high-scoring one. After being put in to bat by the Qalandars, the Karachi Kings scored 186/9 in their allotted 20 overs. Sharjeel Khan and Mohammad Nabi were the vital contributors with the bat for Karachi. While Sharjeel scored a 39-ball 64 at the top of the order, Nabi scored a brisk 57 off just 35 deliveries. For the Qalandars, Shaheen Afridi was the pick of the bowlers. The pacer took 3 wickets and gave away just 27 runs in his 4 overs.

In reply, Fakhar Zaman’s fireworks at the top of the order allowed the Qalandars to romp home with 6 wickets to spare. In a knock laced with 8 fours and 4 sixes, the left-hander scored a rampaging 54-ball 83 and acted as the catalyst behind the Qalandars’ run chase. Apart from Zaman, the likes of Ben Dunk and David Wiese also contributed significantly to the total. While Dunk scored a sedate 57, Weise plundered a 9-ball unbeaten 31 as the Qalandars posted a sensational victory.