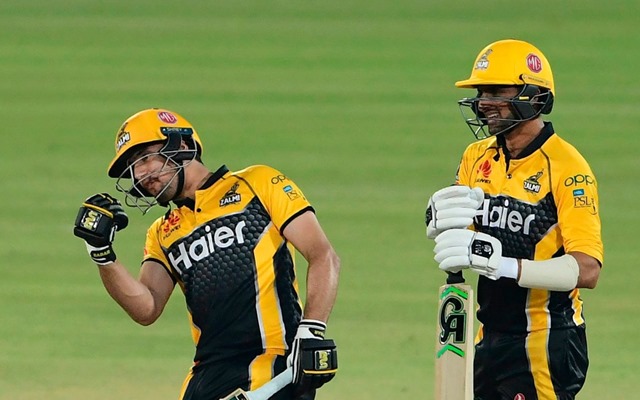 Quetta Gladiators faced their third consecutive loss of this season of PSL as Peshawar Zalmi defeated them by 3 wickets in a thriller. The Quetta team posted a big total of 198/7 while batting first in 20 overs. Their captain Sarfaraz Ahmed played a glorious knock of 81 runs off 40 balls. The wicketkeeper-batsman hit 12 fours and 1 six in his wonderful innings. Azam Khan and Faf du Plessis also had an important contribution with the bat to boost the team total. Azam Khan scored 47 runs off 26 balls with the help of 6 fours and 2 sixes.

Chasing this total, Peshawar Zalmi lost their first 2 wickets for only 27 runs. Opener Imam-ul-Haq played a fine knock of 41 runs off 30 balls in the chase. However, the most important knock for the team was played by young Haider Ali who smashed 50 runs off only 29 balls. In the end, Sherfane Rutherford with an 18-ball 36 run innings and Wahab Riaz with 8-ball 20 run knock ensured victory for the team.

Peshawar Zalmi won this match by 3 wickets with 3 balls to spare. Haider Ali was awarded player of the match for his superb innings.

Let’s look at important stats and numbers after the end of the eighth match of PSL 2021:

8 – For the 8th consecutive match in PSL 2021, the team batting second was successful in chasing the total. Also, all the teams have opted to bowl first after winning the toss in these 8 matches.

202 – Peshawar Zalmi were successful in chasing the target of 199 runs in this match, which is their biggest ever chase in PSL history. Overall, this is the fourth highest chase in PSL.

81 – Sarfaraz Ahmed, with an innings of 81 runs, registered his highest individual score in PSL. He hit 12 fours in his innings, which is the joint-second most in an innings by a player in the league history.

164.73  – After a brilliant knock in this match, Haider Ali’s strike rate in PSL has now risen up to 164.73. He is amongst the top-5 players of PSL now with the highest strike rate in the league.

400 – A total of 400 runs were made in both innings during the match. This is the fifth-highest match aggregate in PSL history so far.