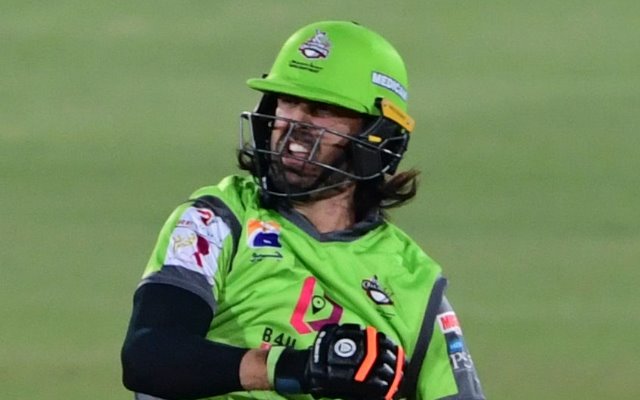 Lahore Qalandars defeated Karachi Kings by 6 wickets in the 11th match of this season of the Pakistan Super League (PSL). Lahore won the toss earlier and invited Karachi to bat first. In the first innings, Karachi lost their initial 3 wickets for only 37 runs. Opener Sharjeel Khan stitched an important partnership of 76 runs with Mohammad Nabi for the fourth wicket.

Sharjeel smashed 64 runs off 39 balls, while Nabi added 57 runs to the team total in 35 balls he faced propelling Karachi Kings to a total of 186/9 in 20 overs. In the bowling department, Shaheen Afridi was exceptional as he picked 3 wickets for 27 runs including the crucial wicket of Babar Azam. Lahore Qalandars looked in deep trouble in the chase as they were 3 down for the score of 33 runs.

However, opener Fakhar Zaman and wicketkeeper-batsman Ben Dunk batted wonderfully to ensure victory. Fakhar hit 83 runs off 54 balls with the help of 8 fours and 4 sixes. In the end, David Wiese played a quickfire knock of 31 runs off only 9 balls to give the team an emphatic win by 6 wickets with 4 balls to spare. Shaheen Afridi was awarded player of the match for his superb bowling.

Let’s look at important stats and numbers after the end of the eleventh match of PSL 2021:

11 – For the 11th match in a row, the team batting second was able to successfully chase the target. This has never happened before in the PSL history that the first set of matches had a similar trend result. Though in the 2019 season of PSL, 14 consecutive matches were won by chasing teams, which happened in the middle phase of the tournament.

1253 – With his 83-run knock, Fakhar Zaman has now taken his runs tally in PSL to 1253. He is now the fourth-highest run-getter in the league and surpassed Mohammad Hafeez and Shoaib Malik during his innings.

344.44 – David Wiese’s exceptional strike rate of 344.44 is the fourth-highest in an innings by a player in the PSL history with a minimum of 25 runs. Anwar Ali who struck a 6-ball 27 run innings in PSL 2019 with a strike rate of 450 is on the top. Among the Lahore Qalandars players, Wiese has become number 1 in this record.

6 – Mohammad Amir bowled a maiden in his 4-over quota in the match, which has taken his total maiden tally to 6 in PSL. He has now surpassed Shahid Afridi in this regard (5) and has reached the top spot.

9 – Fakhar now has nine 50+ scores in the PSL, and has reached the joint fourth spot in this aspect.

19 – A total of 19 sixes were hit in both innings of this match. This is the most number of maximums hit in a match in PSL this season, surpassing the previous tally of 18 sixes.

667 – Sohail Akhtar bagged a duck for the first time in his PSL career. He held the record for most runs (667) in PSL without a duck until now. Tamim Iqbal has scored 605 runs without scoring a duck in the PSL.

119 – The 119-run partnership between Fakhar Zaman and Ben Dunk is the fourth-highest for the fourth wicket in the PSL history so far. This is also the third-highest partnership for any wicket by a pair of Lahore Qalandars in the league.