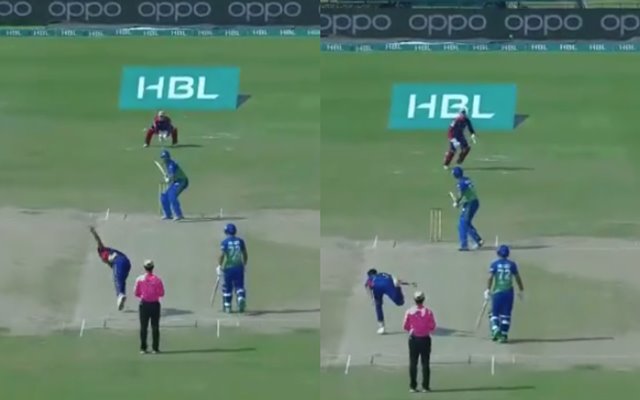 Bowling in the death overs in a T20 match can be very nerve-racking for any youngster. And if a powerful player such as Shoaib Maqsood is at the batting end, any bowler will miss his line once in a while. But, Arshad Iqbal was found to face a different kind of issue while bowling to him during a Pakistan Super League match on Saturday.

The incident happened during the ninth match of the tournament when Karachi Kings were playing Multan Sultans. During the 16th over of the Multan’s innings, Shoiab Maqsood was batting against the right-arm medium pacer Arshad Iqbal. Trying to bowl a back of the hand slower ball to Maqsood, the ball slipped away from the fingers of Iqbal.

As the ball left his hand, it flew away and over the batsman’s head. The ball was angled so wide on the leg stumps that the keeper couldn’t reach it either. The ball eventually rolled to the boundary for a four. The umpire signalled a no-ball.

With that, Iqbal also got a warning from the umpire. Had he bowled another ball like that, he would have been banned from bowling in the innings. Luckily for Karachi Kings, that didn’t happen as he completed his spell of four overs by just giving 36 runs and picking up two wickets. The video was shared by Wisden on Twitter by their official handle.

Multan Sultans took full advantage of batting first on a good track in Karachi. Mohammad Rizwan (43 runs), Chris Lynn (32 runs), James Vince (45 runs) and Shoaib Maqsood (34 runs) all chipped in as Multan ended with a score of 195 for 6 in their 20 overs. Apart from their captain, Imad Wasim, none of the Karachi Kings bowlers was able to keep their economy down and conceded some crucial runs.

Iqbal was the pick of the bowlers with two scalps while the others chipped in with one wicket each. Coming to the chase, Babar Azam, the Kings skipper, never looked stopping on this flat wicket as he went on to score an unbeaten 90-run knock to win the encounter for his side.